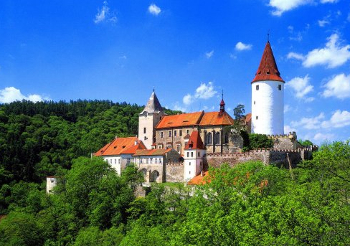 The castle of Křivoklát belongs to the oldest and most important castles of the Czech Republic. The originally gothic castle itself was found during the 12th century during the reign of Přemysl Otakar II. Later was rebuilt by king Václav IV and then generously enlarged by king Vladislav of Jagellon (15th century).

The castle of Křivoklát was seriously damaged by fire several times. After its damage was turned into a feared prison and its importance sank rapidly. First during the Romantic times of the 19th century (when under rule of the family of Fürstenberg that owned the castle until 1929) the castle was reconstructed.

Today the castle serves as a museum, a popular tourist destination and a place of theatrical exhibitions. Collections of hunting weapons, Gothic paintings and books are stored here.

The easiest way how to get to Křivoklát is to use our private transfer. The driver takes you there, waits several hours and drives you back to Prague. Anothe option is to use indirect train+train option with a stopover in Beroun (we can also sell tickets for this option).