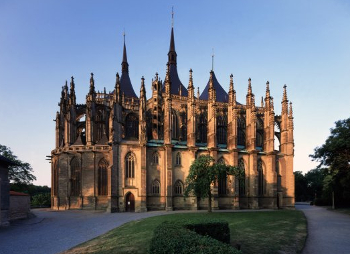 Since 1995 the city center together with neighboring town of Sedlec have been listed as UNESCO World Heritage Site.

The Kutná Hora town has its origin in 13th century and is linked to the development of monetary economy, Silver coins have been discovered in the period 985–995 AD in the settlement of Malín, which is a part of Kutná Hora. In 1419 Kutná Hora was second the most important in Bohemia (next to Prague), having become the favourite residence of several of the Bohemian kings.

In 1541 the richest mine was hopelessly flooded; in the insurrection of Bohemia against Ferdinand I the city lost all its privileges. In the 16th century the town became impoverished. During the Thirty Years War (in 1639 and 1643), two major raids of Swedish troops caused extensive damage to the town. In 1770 Kutná Hora was devastated by fire. Finally at the end of 18th century the mines were abandoned. 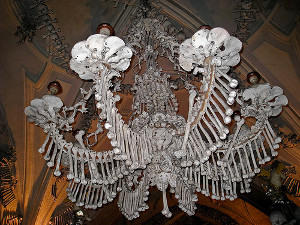 The well-known Cathedral in Kutná Hora is The St. Barbara Cathedral. Construction works were initiated in 1388. Just for your curiosity – the first architect was a member of the Parler family – Peter Parler was the main architect of St. Vitus’ Cathedral in Prague Castle and his son Jan got married in Kutná Hora in 1389. Most of interior decorations of St. Barbara’s Cathedral date from the late Gothic period.

The Gothic Stone Haus, which since 1902 has served as a museum, contains one of the richest archives in the country.

The Gothic St. James Church, with its 83 metres tower, is another prominent building.

Sedlec is the site of the Gothic Cathedral of Our Lady and the famous Ossuary.