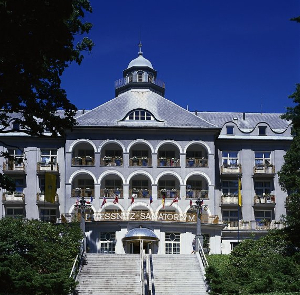 Priessnitz Medical Spa is located in a truly beautiful part of the Czech republic. Based on the side of a hill that forms the eastern edge of the Rychlebske hory mountains, it is situated about 2 km from the town of Jesenik at an average altitude of 620 metres. The dramatic landscape makes it a most suitable place for treating the upper and lower respiratory tract, as well as addressing disorders within the circulatory and nervous system, including the autonomic nerves. The resort benefits from a favourable climate, meaning guests can visit whatever the season. The health resort offers a rather cool climate moving in from the north air current of the Baltic Sea, escaping harmful emissions. From the south, west and south-east, Hrubý Jeseník, Rychlebské hory and the Zlatohorská vrchovina, it is protected against emissions. In general, a lower level of allergens in the atmosphere subsequently has an influence on the presence of negatively charged lone molecules. Recent systematic analyse have proven the presence of several trace elements, Essentials in order for the body to develop and function properly. The change in environment for individuals to new healthy surroundings not only influences their psychological state but primarily their overall state of health.

The existence and the subsequent prominence of Priessnitz Medical Spa is something for which the spa is deeply indebted to Vincenz Priessnitz (1799–1851), who in 1822 set up in Grafenberg the world's first hydrotherapy institute, laying foundations for a new method of treatment – hydrotherapy. Priessnitz achieved what was then nigh on impossible – he introduced a brand new form of healing that totally changed many aspects of patients' lives. Removed from their usual gloomy surroundings to the countryside, his therapy encouraged them to follow a regular daily routine, eliminated harmful influences and freed them from ordinary everyday concerns; thereby giving them renewed hope and a zest for life. Thanks to Vincenz Priessnitz, people became reinvigorated through methods adhering to the laws of nature.

What we cure in Priessnitz Spa?