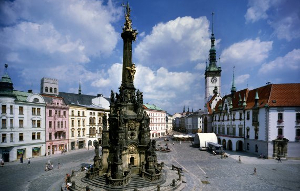 Olomouc is a city in Northern Moravia. The historical heart of Olomouc, which is dominated by the Holy Trinity Column, which is included in the UNESCO list, is the second most important monument zone in the Czech Republic after Prague.

Olomouc was an important centre of the Great Moravian Empire during the 9th and early in the 10th century. Later it became for long time the capital of the province of Moravia. The bishopric of Olomouc was founded in 1063, and raised to the rank of an archbishopric in the year of 1777. 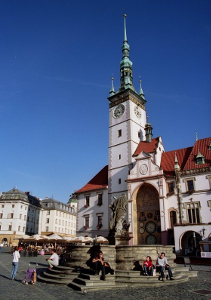 In 1306 King Wenceslas III stopped here on his way to Poland, but here he was assassinated. With his death the whole Přemyslid dynasty died out.

During the Second World War II. (1939–1945), most of the towns' German residents sided with the Nazis and the Germans run town council renamed the main square after Adolf Hitler. The Czech residents changed the name again after the town was liberated in 1945. 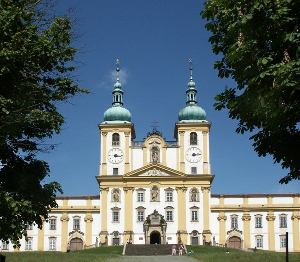 Olomouc contains several large squares, the chief of which is adorned with the Holy Trinity Column, designated as a UNESCO World Heritage Site. The column is 115 ft (35 m) high and was built between 1716 and 1754.

The city has numerous historic religious buildings. The most prominent church is Saint Wenceslas Cathedral founded before 1107 in the compound of the Olomouc Castle.

The church is next to the Přemyslid Palace, a Romanesque building built after 1141 by the bishop Henry Zdík. Its remains one of the most precious monuments of Olomouc: such an early bishop's palace is unique in Central Europe.

Saint Maurice Church, a fine Gothic building of the 15th century, has the 6th-largest church organ in Central Europe.

Svatý Kopeček („The Holy Hillock“ has the magnificent Baroque church of the Visitation of the Virgin Mary. It overlooks the city. The Pope promoted the church to Minor Basilica.

Olomouc is proud of its six Baroque fountains. The fountains survived in such number thanks to the city council's caution.

In the largest square in Olomouc (Horní náměstí – Upper Square), in front of the astronomical clock, is a scale model of the entire old town in bronze.