For more detailed information about these sights follow the link.

The most prominent church is the St. Wenceslas cathedral. In the end of the 19th century was rebuilt in neo-Gothic style, but it kept many parts from the original church, which had also been rebuilt many times (Romanesque crypt, Gothic cloister, Baroque chapels). The church neighbors with the Bishop's Palace, a 12th century Romanesque building. The real Přemyslid Palace, i.e. the residence of Olomouc members of the governing Přemyslid Dynasty, used to stand nearby.

Visiting the St. Maurice church, a fine Gothic building of the 15th century, and the St. Michael church are also recommended. 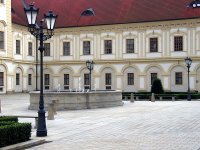 The Neo-baroque chapel of St. John Sarkander stands on the place of a former town prison. Catholic priest John Sarkander was imprisoned here in the beginning of the Thirty Years' War. He was accused of collaboration with the enemy and tortured here, but did not reveal anything because of the Seal of Confession, and finally died of injuries. He was canonized after five centuries by Pope John Paul II during his visit in Olomouc in 1995.

The principal secular building is the town hall, completed in the 15th century, flanked on one side by a Gothic chapel, transformed now into a museum. This museum possesses a tower with an astronomical clock.

The old university was founded in 1573 and suppressed in 1860. Then reopened in 1946 and finally named Palacký University (Palackého Univerzita in czech).

Olomouc possesses six Baroque fountains. The fountains survived thanks to cautious policy of the city council. While most European cities were removing old fountains after they had built their water supply piping, Olomouc decided to keep them as water reservoirs in case of fire. For their decoration ancient Roman depiction was used. Five of them depict Roman gods such as Jupiter, Mercury, Neptune, Triton, and Hercules, and one depicts Julius Caesar.

A lot of usefull information can be found on the official site of Olomouc.

Back to the history of Olomouc