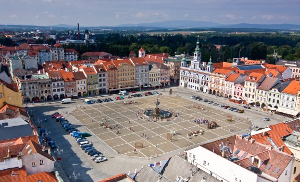 České Budějovice – beer from the South

Elegant townhouses gathered around one of the largest squares in Europe, an idyllic salt store and a brewery cooking up the original Budvar beer – this is České Budějovice. This city has preserved its historical character over the centuries but is also a modern regional centre. So come and savour the city’s pleasant atmosphere with a tankard of our world famous beer.

The city lies in centre of the South Bohemia Region. České Budějovice was founded in 1256 by Hizo, knight of King Premysl Otakar II at the confluence of the Vltava and Malše rivers. 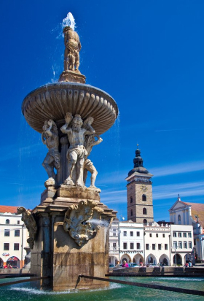 In the centre of České Budějovice you’ll find the city’s pride and joy – a square piazza named after King Přemysl Otakar II. One of the largest squares in Europe. The square is hemmed by exquisite Baroque arcaded houses, and the grand building of the town hall, one of the country’s most attractive, also graces its cobbles. Take a break by the Baroque Samson fountain in the middle which sports some wonderful sculptural decoration. On a walk through the city centre be sure to visit the Cathedral of St. Nicholas and the city’s famous salt store.

In České Budějovice you can find numerous late Gothic, Renaissance and Baroque houses, the arcades and the remains of a Gothic fortification. A visible symbol of the previous wealth of the city is the Black Tower (Černá Věž). This is a 72 meters high bell- and watch-tower from the year 1577.

An integral part of the city is the Budějovický Budvar brewery where beer has been produced using an original recipe for seven centuries. The largest brewery – Pivovar Budějovický Budvar which has legal rights to market its beer under the „Budweiser“ brand name in much of Europe. The same product is also sold elsewhere under the names „Budvar“ and „Czechvar“. The American lager was originally brewed as an imitation of the famous Czech original but over time has developed its own identity and attained remarkable commercial success.