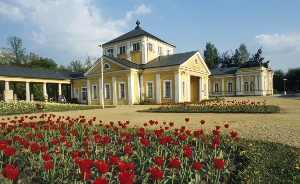 Františkovy Lázně (in German Franzensbad) is a town in Karlovy Vary Region in the western Czech Republic, near the town of Cheb with about 5,200 inhabitants.

The distance between Prague and Františkovy Lázně is approximately 200 km.

Františkovy Lázně is world renowned as a spa. The salutary effects of the springs were known from the 15th century. First, the water was used locally for salutary purposes, later sold all over Germany.

In 1700, it reportedly sold more water than all other German spas combined. In the year 1793, the town of Františkovy Lázně was officially founded under the name Kaiser Franzensdorf (Emperor Francis II.'s village) and later renamed to Franzensbad, under which name it became a famous spa.

In 1865 Francis Joseph I. promoted Františkovy Lázně from spa to town.

It was the first mud bath in the world and operated 24 mineral springs, 12 of which are still in operation.

Until their expulsion in 1945 the majority of the population of the city was German and after 1945 the spa resort was nationalized for the working class.

In 1991 the spa was in the hold of Františkovy Lázně joint stock company, which has rebuilt the spa and transformed to one of the most popular spas in the world.