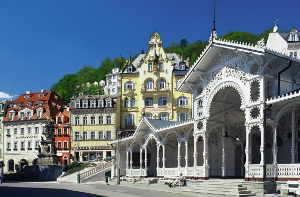 Karlovy Vary – Czech name for Carlsbad located in the western part of the Czech Republic. Holy Roman Emperor Charles IV, founded the city in 1370 and gave it the name Carlsbad.

This town is famous for its hot springs – 13 main and about 300 smaller springs.

Major local sights include St Andrew’s Church and the Orthodox Church of St Peter and Paul, the Municipal Theater, Mlýnská kolonáda and the Church of St Mary Magdalene. The spa town is surrounded by the romantic mountainous landscape of the Krušné Mountain foothills. The wooded slopes conceal kilometres of forest trails that provide a variety of delightful walks and panoramic views of the spa valley. Karlovy Vary is associated with the traditional production of crystal glass and porcelain, as well as with numerous festivals and concerts. Furthermore, the production of the acclaimed herbal liquor called Becherovka and the popular Mattoni bottled mineral water have been related to the town for more than two centuries.

In the second half of the 19th century, many metropolitan style buildings were built – mostly bathhouses and hotels, the Town Theatre and the majority of savings banks. Visitors will find there buildings in the Classicist, Empire, Rococo or Biedermeier styles.

Zámecký vrch – Chateau Hill – is currently developed with the building complex of Chateau Bath. The structure was designed by architect Ohmann. The building's ar­chitecture is influenced by eclecticism with numerous Art Nouveau elements and ornaments.

The busiest avenue is King George Avenue that connects the shopping administrative centre with the spa centre.

Not only for those who admire golf the Grandhotel Pupp worth’s to see. Pupp is not very far from the theatre building. Since 1895 has been reconstructed and, when the owners executed the principal unification of the buildings, arranged to provide comforts and luxury to its guests. Karlovy Vary together with Český Krumlov are after Prague the second most popular tourist destination, especially for international celebrities visiting for spa treatment. 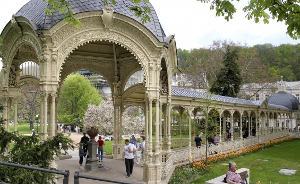 There are about one hundred mineral springs but only twelve of them are used as a drinking cure, differing in the temperature and the amount of carbon dioxide. The strongest and best-known spring is Vřídlo, rising from the depth of approximately 2,000–3,000 meters. Its temperature reaches 73 degrees Celsius. The temperature of other springs is about 40 degrees Celsius. The springs cure mainly metabolic disorders, nevertheless, they are used for inhalations and baths alike.

In the spa of Karlovy Vary the main specialisation is in Cardiovascular Diseases, Digestive System Diseases, Disorders of metabolism and Glands of External Secretion, Musculoskeletal Diseases.

In a long tradition, this town is holding annual film festival known as Karlovy Vary International Film Festival the most important of Category A in Central and Eastern Europe.

The Karlovy Vary IFF presents annually more than 200 new films from the whole world. The festival is open to the public and is visited by thousands of people.

What you should experience

And for those who like crystal the glass manufacturer Moser Glass is located in Carlsbad.

How to get to Karlovy Vary by public transport