The Moravian capital of Brno is the second largest city in the Czech Republic and gateway to the fertile vineyards of South Moravia. Brno was founded in 1243 although the area had been settled since the 5th century. The city’s Old Town Hall is guarded by a two-metre dragon, and one of its gems is the Functionalist Villa Tugendhat which is included in the prestigious UNESCO list.

Get from Brno to Prague, Vienna and Bratislava

Today Brno is only 2,5 hours far from Prague by bus or 2 hours by car (220 kilometers is the distance between Prague and Brno). Brno lies in the central part of Europe and within its two hundred-kilometer radius there are other important European capitals: Prague, Vienna and Bratislava as well. You can book flight to the international airport in Brno, which serves regular flights.

Today Brno has several universities and important judiciary institutions. Brno has the seat of the Constitutional Court of the Czech Republic, Supreme Court, and Supreme Prosecutor's Of­fice.

The most important example of modern architecture in Brno is the Tugendhat Villa – a historic site inscribed on the UNESCO's World Cultural Heritage List. Villa Tugendhat has borne witness to the birth of modern housing and also to the tragic fate of the people who lived there. This work by the famous German architect Mies van der Rohe is to this very day regarded as one of the four most important villas in the world.Villa Tugendhat in the Brno city district of Černá Pole was built at the request of Greta and Fritz Tugendhat who came from a rich textile trading family in Brno. The building is set into a slope, the greatest virtue of which is the wonderful view over the historical centre of Brno. The villa broke from all period trends in all respects with its functionality, and its interior was way ahead of its time. 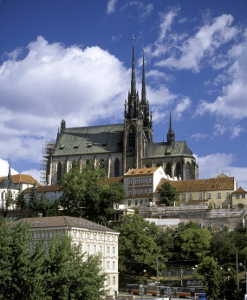 Where to go in Brno

A dominant feature of Brno is the Gothic Cathedral of SS Peter and Paul on Petrov Hill, which is linked to several legends and which saved the city from the Swedish army during the Thirty Years War. Špilberk fortress rises up to the sky opposite the cathedral, formerly a highly feared prison, which is now used as a museum and gallery.

Enjoy going to the theaters, museums, cinemas and clubs or Brno ZOO but our recommendation is to visit World Moto Grand Prix Brno is also a city of modern shopping and entertainment centers.

Mahen Theatre in Brno was the first building in the world to use Edison's elec­tric lamps.

Brno’s surroundings are also lovely. We recommend you visit Slavkov Chateau and the Peace Mound, where the Battle of Austerlitz took place in 1805, or the nearby caves of Moravian Karst.